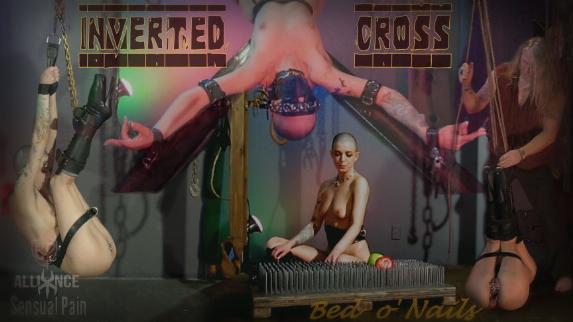 Inverted cross Bed O’ Nails – Master James had been hard at work for the past week building and preparing an extra special set with new devices for a slave who was being sent to Him by another Master who wasn’t so well equipped for this next phase of tests. Master James was to test her endurance and ultimately, her pain tolerance and strength of mind in a fear induced environment.
Unfortunately, she fell ill the night before and had to reschedule.
She felt a certain air of impudence coming from her Masters direction…” W/we will still shoot, suit up my slave… I’m waiting”.
Slave Abigail was actually in the mood for her Master’s rough hands on her soft skin… He had an excitement about Him that was greater than usual, which caused her excitement with the same fervor. He wastes no time getting right to work with His methodical placement of bondage, and as to not waste anymore of your time by descriptively painting the picture of what happened next… I will go ahead and list some key elements to this beautifully crafted scenario.
Full Leather Bondage, Half face hood, Blindfolded, Inverted St. Andrew’s Cross, XXL Tunnel plug in ass whole time, Blinded/Bound/Gagged/Inverted/Double Penetrated/Single tail whipped/Face, pussy and feet flogged,brought almost to orgasm as she moans with pleasure from this pain, Outer Labia Piercings with weighted hooks, Ballet trainers, Arm Binders, bound like a calf and suspended,red panties cut off and used as gag held in place with a crude belt, Mouth to ass to mouth with deep-throat, excruciating bondage position with a game of “don’t drop the apple on the Bed of (700+) nails that was placed underneath your writhing body”,finished with a single tailing and paddling and intimate talk with slave abigail. PHEW!!!!

Join here to get this movie

Go here to get more movies